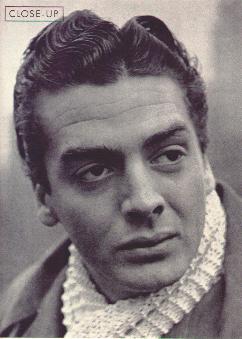 From 1939 through 1984, Mature appeared in scores of musicals, Westerns, comedies, historical epics and melodramas.

In fact, Harrison Ford, Brad Pitt and other Hollywood "hunks" have Mature to thank for the term. When he appeared on Broadway in "Lady in the Dark," his sensual mouth, dark wavy hair and beefsteak build caused the playwright Moss Hart to call the 6-foot-2, 200-pound actor a "beautiful hunk of a man."

The son of Austrian immigrant Marcellus George Mature and the former Clara Ackley, he grew up in the Germantown neighborhood. The Matures also had a daughter who died in infancy and an older son who died at 11.

School never suited Mature. On his first day, he was sent home from George H. Tingley School for biting the fingers of a teacher who insisted he share his lunch. He later attended St. Paul and St. Xavier Roman Catholic schools, the Kentucky Military Academy and St. Joseph in Bardstown.

In a 1984 interview with CourierJournal film critic Roger Fristoe, Mature admitted being an unruly student. His mother was called to St. X so often, Mature said, that the other students thought she worked there.

The young Mature tried various enterprises before acting. He sold magazines and operated an elevator at the Brown Hotel - until he was fired for dancing on the roof garden while on duty. He then sold enough candy to buy a restaurant. In 1935, Mature sold it and left for California.

Once there, a friend suggested that his looks and large voice might win him a role at the Pasadena Community Playhouse. He made his debut in 1936 in "Paths of Glory."

A producer saw Mature's picture on a poster and cast him in his first movie role - as a gangster named Lefty in "The Housekeeper's Daughter," directed by Hal Roach.

Roach directed him again in "One Million B.C.," which had its world premiere in Louisville at the Loew's Theatre (now the Louisville Palace) on July 6, 1940. Although he was a hit, the role he played, Tumak the caveman, meant that many critics did not take him seriously as an actor.

To get away from what he called "grunt-and-groan stuff," Mature went to New York and lucked into a stage role in "Lady in the Dark," with Danny Kaye and Gertrude Lawrence.

CRITICAL JIBES followed him, but he learned to laugh at himself. Mature often told the story of being turned down for membership at the Los Angeles Country Club, which said it didn't accept actors. Mature said he told the membership chairman, "Hell, I'm no actor - and I've got the reviews to prove it."

He did have important roles. In "My Darling Clementine," 1946, he was Doc Holliday to Henry Fonda's Wyatt Earp. The version of the fabled gunfight at the O.K. Corral is considered one of director John Ford's greatest films.

Cecil B. DeMille's 1949 telling of the saga of Samson and Delilah cast Mature and Hedy Lamarr in the title roles. It was a smash hit.

He won critical praise for his portrayal of a reformed gangster in the 1947 crime drama "Kiss of Death" and for his work in "Fury at Furnace Creek" and "Cry of the City."

Mature invested in real estate and retail stores, enabling him to retire comfortably before he reached 45. He moved to Rancho Santa Fe, and once bragged that he played golf four hours a day, six days a week.

He made only a few film appearances in the last 35 years, notably the 1966 Italian farce "After the Fox," spoofing his old image; and "Every Little Crook and Nanny," a 1972 comedy in which he co-starred with Lynn Redgrave. In 1984 he made a rare appearance on television, playing Samson's father in a new version of "Samson and Delilah."

MATURE DATED a bevy of film beauties, including Betty Grable, Lana Turner and Rita Hayworth. And he had a rich vault of movie stories he liked to tell.

He recalled in his Courier-Journal interview about being presented to Queen Elizabeth in the mid-1950s alongside Marilyn Monroe, who wore a strapless gown so tight she had to be sewn into it.

Before the ceremony, Monroe had emerged from the car, fallen forward and stretched the top of her dress. As the queen approached, Mature glanced down and saw that Monroe's legendary bosom was slipping free.

He tried to hold up the back of Monroe's dress with one hand, while removing his gum from his mouth with his other hand, but he had to let go of the dress to shake hands. Despite the effects of gravity, Mature said that Monroe remained unperturbed as she chatted with the queen.

Mature also said he "took acting five times as seriously as anyone else. I just couldn't show it. Some kind of complex, I guess."

He was married five times. Survivors include his wife, Lorey, a former Chicago opera singer, and their daughter, Victoria, a recent graduate from an opera program at the University of California at San Diego.

Private services are planned for today in Louisville, with arrangements being handled by Bosse Funeral Home.